Its fair to say that 2019 was not a good year for Bethesda. Yes, starting this review by mentioning a different developer might come across as strange but even stranger is the feeling of playing this game and realising that Bethesda is just not needed anymore.

While Bethesda have consistently strayed from their usual formula over that few years, here we have The Outer Worlds, a game by a studio who made Fallout New Vegas, arguably the best Fallout in the series and one that Bethesda have failed to match. 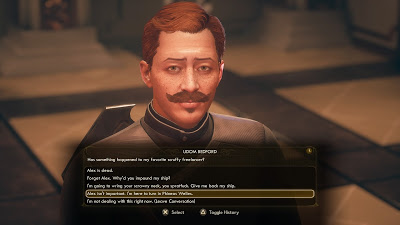 The usual suspects are here, Great dialogue, a branching but deep story, a plethora of weapons, a diverse and open world that immerses you not by graphical fidelity but by the lore. It’s a home run. The dark humour from New Vegas also follows suit with some dialogue and side quests outright hilarious.

The story premise is simple, you are a colonist currently in cryogenic sleep who has been woken by a zany scientist who explains that you are on a ship with hundreds of thousands of colonists who are still asleep but the ship has been abandoned in a star system called Halcyon in which corporations have control and your job is to bring order to Halcyon and save your fellow colonists.

After only a few minutes in you can see where Obsidian was influenced: Firefly (The TV show) and Mass Effect being the major standout ones but there are a plethora of easter eggs and homages within the game which just makes it more endearing.

The plot branches with various end games dependent on the choices you have made and these choices do really have a tangible impact on the path your story moves and this is made clear at the start of the game when one of these choices are made available and the routes available are not as black and white as you think, there are pro and cons for either choice and you can use the various side quests and lore available to make your decision on which way to go.

The only real downside are the combat mechanics which has shown to be a consistent pattern throughout Obsidians back catalogue. This is not to say it is bad, it just doesn’t hold up to the standard the rest of the game sets. The V.A.T.S system from Fallout is kind of brought along here now being renamed to TTD which is very similar to VATS with a few additions such as spotting enemies weak points.
The wackiness of Obsidian games still exist here; want to get high and hallucinate with a priest until he experiences an existential crisis? Want to turn up uninvited to one of your companions parents house who are very rich and wreck shit? Want to help your ship engineer set up a dream date with someone she’s heads over heels for? You can do all this and more in Outer worlds. 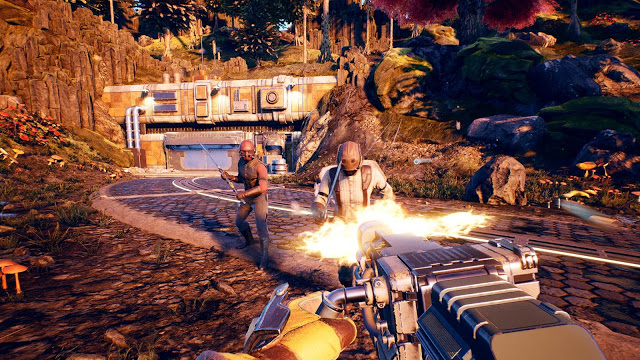 Along with the story, the heart of the game are the characters, especially your companions. Akin to Mass Effect 2, you can recruit companions to become your crew and each have their very deep backstory and even loyalty missions. Sprinkle some mad “What are his intentions” scientist and an antagonist governing body called simply “The board” and you have a fantastic cast to tell a fun yet depressing story.

The Outer Worlds is a fantastic game containing all the elements that made Fallout New Vegas great and adds even more to the package. It also does what alot of open world games fail to do in recent years – Make the game beatable in a reasonable amount of time. We don’t all have hundreds of hours to sink in and the length of the The Outer Worlds hits a sweet spot. So great game, go get it!