Samsung has announced its latest flagship phones: the Galaxy S20, Galaxy S20 Plus, and Galaxy S20 Ultra. Samsung are also adding the “5G” moniker to each device as they will support 5G in the UK and other select markets however the S20 will have a non 5G version available.

So Samsung have moved on from the Galaxy S10 to the S20. They say this is to build a “new foundation” but it just feels like Samsung are wanting you to just notice these phones compared to the plethora of similar devices that are currently available and coming this year. This years range of devices will have the usual Samsung staples – great build quality, great cameras, big, vibrant screens and a glossy glass back which will get coated in fingerprints from the second you hold the phones. 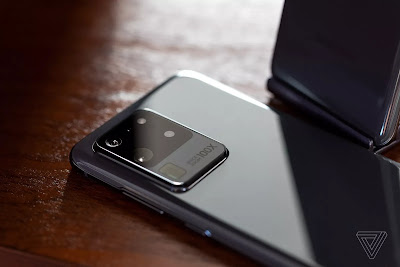 In terms of new design features, there is a new rectangular camera housing for the new camera arrays on the back and the front holepunch camera is now in the middle following the design language of the Galaxy Note 10 form last year. Oh and the headphone jack is gone, making 2020 the first year when every major flagship phone from Samsung won’t have one.

Each phone has an OLED HDR+ display that supports a 120Hz refresh rate. Interestingly, Samsung says it isn’t bothering trying to dynamically adjust that rate depending on what the screen is doing. It’s just a switch between 60Hz and 120Hz. The company claimed to me that setting it to the higher rate would only cause a 10 percent dip in battery life.

All-new camera systems
Samsung will want these phones to make 5G mainstream in the UK but I dont think that’s their most important feature — Instead, Samsung is taking a big swing with the camera systems on these phones. Where Apple and Google have been talking up their computational photography chops, Samsung is doing what Samsung does best: throwing more hardware at the problem.

That’s not to say that Samsung hasn’t updated its software for better image processing — it may well have. I can’t really judge without getting my hands on the phones but what I can do is attempt to explain the complicated matrix of camera specs on these phones, all of which are slightly different from one another.

At a high level, what the table above means is that Samsung is making a big bet on high megapixel counts. If you take a look at the S20 Plus and Ultra, you’ll see sensors of 48, 64, and 108 megapixels. All of these cameras will default to taking 12-megapixel photos by default, though you can go up to the full count if you like.

Historically, if you saw a phone camera with some outsized number of megapixels, that was a very bad sign. It meant that instead of tuning the software to make great photos, its maker threw megapixels at the problem and hoped people would be snowed by the big number on the spec sheet.

Samsung’s contention is that it’s able to use a combination of those sensors, the chips that control them, and its own software to make those high-megapixel sensors do things that other smartphones can’t, like zoom in up to 100 times when taking a photo.

For the S20 Ultra, Samsung went all out and included a “folded” zoom lens, which means that the hole on the back of the phone actually hits a prism that redirects light across the phone to the sensor. It’s the same basic concept Huawei used in the P30 to achieve its zoom last year. That gets the S20 Ultra to 4x zoom. Then Samsung says it can do “lossless hybrid optic” zoom up to 10x though some combination of binning (combining multiple pixels into one big pixel) and sensor cropping. After that, it’s digital zoom up to 100X using similar methods. 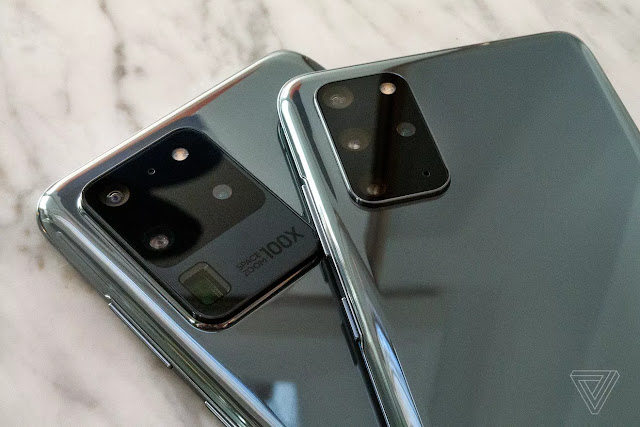 Samsung is also famous for throwing a billion confusing features at Android, a habit it has, thankfully, toned down in the past few years. Still, there are a few new things, but most only work with other Galaxy phones. There are two new ways to share files: over Wi-Fi Direct to other Galaxy phones or via a temporary 24-hour download link for anybody.

In terms of specs, name one, and there’s a good chance the S20 phones will have it. They will all use the Qualcomm Snapdragon 865 processor, fast charging, wireless charging, Bluetooth 5.0, Wi-Fi 6, and so on. Each phone has 12GB of RAM paired to 128GB of storage by default (expandable via microSD). You can spend more to bring the Plus and Ultra up to 512GB of storage. When you do that on the Ultra, Samsung ups the RAM to 16GB. 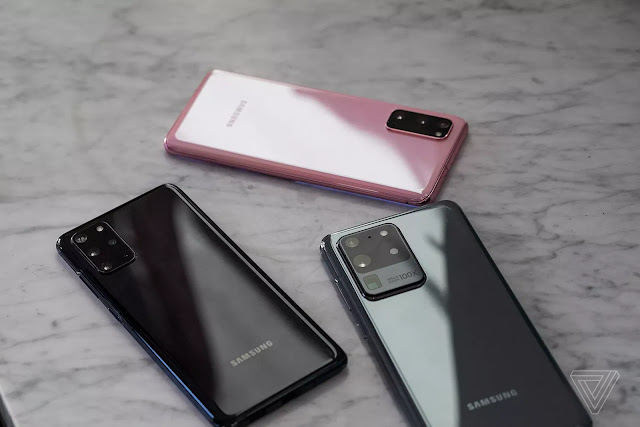 The batteries are capacious — all the better to run those 120Hz screens. The S20 has a 4,000mAh battery, the Plus 4,500mAh, and the Ultra 5,000mAh. The Ultra feels thicker and heavier than the others as a result (and the periscope lens also probably adds some thickness).

Samsung called these the S20 because it wants them to be the start of a new generation of phones, but I don’t see a generational gap between the S10 and the S20.

Instead, the Galaxy S20 phones are an exercise in excessiveness. They have every spec you could ask for in an Android phone, but that doesn’t mean they have a lot of major new ideas. There’s just one, actually: Samsung’s major bet on a new camera system. To convince people to upgrade at prices that start at a eight hundred pounds, Samsung had better deliver.

Images courtesy of The Verge