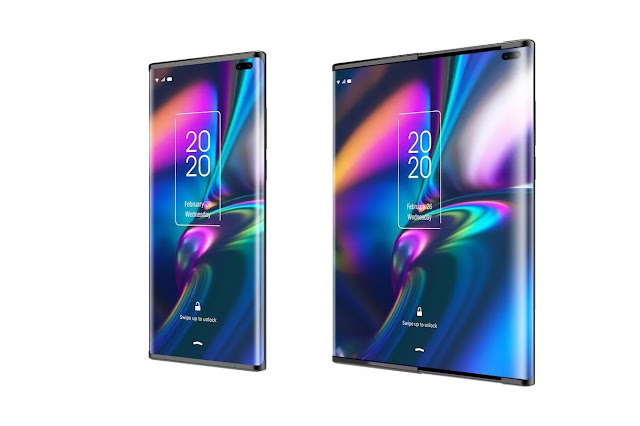 TCL is working on a new phone with a slide-out display, leaked images published by CNET suggest. Unlike devices that fold in half like the Motorola Razr or Samsung Galaxy Fold, the images show a phone that seems to work like an extendable dining table, with a second display that slides out from underneath the first. According to CNET’s sources, TCL had been planning to show off the phone at MWC, before the trade show was cancelled over coronavirus fears.
The images paint a compelling picture of what the device could be, but they raise more questions than they answer. For starters, when the device is expanded the screen seems to stretch continuously from one edge to the other, which begs the question of where it goes when the device is unexpanded? If it folds behind the first screen then it’s going to have to bend very sharply in order to fit inside the smartphone-sized housing. The design also suggests that half of the phone will be left empty when the device is expanded, since it has to be able to fit while the device is in its more compact mode

Just because the device was going to be shown off at MWC, that doesn’t mean it’s anywhere close to release. TCL has shown off its prototype foldable devices at a couple of different shows, but it’s yet to announce a consumer-ready product. At MWC last year TCL had a foldable prototype that was so fragile that even TCL’s own staff were warned off from touching it. Then, at CES earlier this year, the company was willing to let people fold its prototype, but said that it was “taking it slow” when it comes to actually releasing a foldable device.

Regardless of how far away the device may be from release, the images suggest that phone manufacturers aren’t done experimenting with new form-factors. Whether it’s tablet sized devices that fold down to become the size of a smartphone, smartphones that fold to become more compact, or even devices that fold more than once, there’s no idea too wild to be off the table just yet.