So after waiting since 2005 I finally got my hands on the Final Fantasy 7 Remake demo and it was an absolute surreal feeling to finally get some actual playable content after all these years. The experience, in short (and it was short) was absolutely phenomenal. From the revamped soundtrack, the updated combat mechanics and the stunning visuals, Square Enix have shown their hand here and if the rest of the game carries this level of quality, its a winner.

But there are a lot of changes made here to make this first “part” set entirely in Midgar and the 1 hour plus you get with the demo shows enough for you to see where the changes will be in the main game. 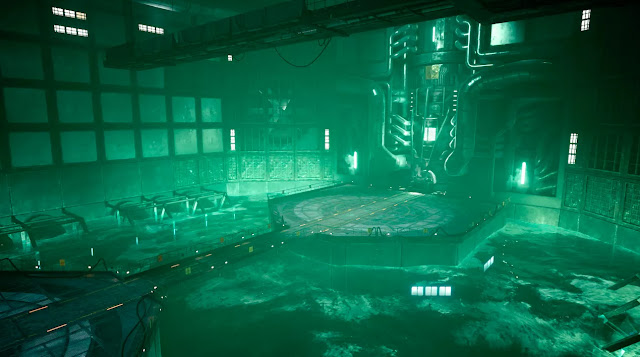 In the original Final Fantasy VII, Midgar can often feel more like an idea than a place. It’s billed as a metropolis torn by ecopolitics and economic disparity, yet players have little chance to see these dynamics at play outside of a few small sectors with tiny populations. Much of its world is reduced to beautiful backgrounds. They ultimately set a scene, opposed to offer an explorable world. Square Enix’s Final Fantasy VII Remake, however, opens up the game’s most iconic setting in a way that feels luxurious in comparison.

Unlike the original, Final Fantasy VII Remake is being split into a yet-to-be-determined number of separate games. For the first, Square Enix chose to highlight Midgar exclusively, otherwise known as home to insurgent group Avalanche and evil corporation Shinra. Shinra, its private military, and the megacorp’s role in the planet’s slow destruction are key to the story of Final Fantasy VII; focusing exclusively on its home base makes sense. After playing the recently released  demo on the Playstation store, the answer to how the developer would turn a few hours of gameplay into a full game feels within reach.

The demo includes the game’s introduction sequence, in which Cloud — a broody mercenary who joins up with Avalanche for a payday — breaks into a reactor to blow it up and culminates in the now marquee boss fight against the scorpion mech.

Where reactors previously felt like a series of small, linear rooms to pass through, in the remake they become major undertakings. With the bombing run intro, the reactor felt dim, massive, and sterile in a very evil corporation way. On the way to the game’s boss fight, a plethora of enemies are thrown at you as well as some platform slash puzzle mechanics such as darting through a laser filled area after figuring out the pattern for when the lasers turn off long enough for you to pass.

Threaded in between fights, Avalanche’s members chat among themselves in the background. Barret delivers speeches about the group’s mission that teeter between rousing and fanatical. Jessie eagerly discusses Cloud’s looks. It felt at times strangely cheerful for a group of eco-terrorists, but the remake doesn’t seem to be shying away from examining cause and consequence.

Square Enix leans hard into Shinra as a sort of evil oil empire, but with a planet energy known as Mako. It’s ruthless in twisting public narratives to its advantage and keeping the populace dependent on its energy supply by any means necessary.

Yet Avalanche’s presence, too, has consequences for the people of the city. After you complete the demo, you get played a sizzle reel which shows the consequences of the reactor blowing up, as the team victoriously heads back to base, civilians sit dazed in the street. They’re frightened and in shock, a bunch of innocents caught in the chaos of a fight in which they have no power. As Cloud dodges enemies and runs past familiar spots, like a giant billboard advertising the play Loveless, people wonder what will happen next or if they’re safe. He’s too busy scanning for access to the rooftops to stop and notice.

Square Enix has yet to show some of Midgar’s most iconic moments, like the trip through Wall Market or the first arrival of mob-like group the Turks. How it will amend or build on a plot established more than 20 years ago is still unclear. In these early glimpses, Square Enix looks to be far more interested in engaging with ideas it once skated past, and what they might mean for the people caught in between.

The other major change you see almost immediately is the combat. Unlike the original FFVII many are familiar with, the remake features a fascinating hybrid battle system closer to what you’d find in Final Fantasy XV or Kingdom Hearts. Yet instead of sticking closely to one of those two styles, the remake borrows the best of the series’ action-based real-time systems and blends them with the turn-based strategy design that made the original such a lauded RPG. It feels like a polished, modern version of Final Fantasy XII combined with something from an action-heavy studio like Platinum Games.

I walked away impressed with not just how new and fresh everything felt, but also how much of the original game’s spirit felt intact.Never once did I feel like I was leaning too far into just running around with Cloud and swinging my Buster Sword, or spending inordinate amounts of time digging through menus to cast spells or use items. Everything flowed nicely, and by the end of the demo, I was seamlessly switching between Cloud and Barrett to drop damage-heavy combos and special moves.

It seems like a considerable amount of thought went into how to evolve the original game’s take on RPG combat for a modern setting. There are no more random battle encounters. Enemies typically find you (although you can avoid them if you’re crafty) and you then engage in an open combat arena. Once the mode switches, you can run around, dodge attacks, and perform a mix of character-specific combos and special moves that can be various levels of effective depending not just on what you’re fighting, but also how far away and how large the enemy is.
At that moment, I felt like I was playing an original and proper action RPG, and I almost forgot entirely that it was instead a remake of a 23-year-old classic. And that’s the beauty of the Final Fantasy 7 Remake — in the heat of these kinds of battles, it feels brand new. April 10th cant come soon enough!

If you have a PS4, you too can play the demo of Final Fantasy VII Remake.