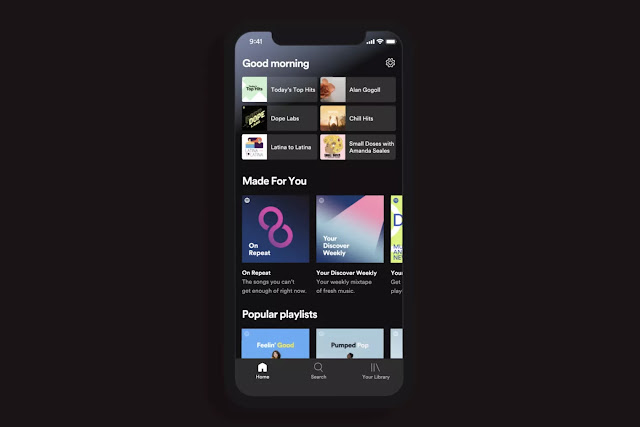 Spotify users are being treated to a massively updated version of the Home screen on phone and tablet. There are nice little touches such as being welcomed with a friendly ‘good morning’, ‘good afternoon’ or ‘good evening’ depending on the time of day, but there’s much more to the revamp than that.

Throughout the day, not only will the welcome message that change, but also the type of content that is offered up. The suggested Daily Mix playlists, Discover Weekly and the ‘made for you’ podcast have been shrunk down to smaller buttons that appear at the top of the screen so you can jump straight in – or you can keep scrolling to browse further.

Beneath the six recommendations, you can access your recently played content while further down you’ll find suggestions from Spotify about what you might like to listen to. The effect of the redesign is that it is now quicker than ever to jump into the music you know and love, but great care has been taken to minimise the amount of space different elements take up.

This means that while the Home screen is now effectively comprised of two sections with new discoveries highlighted in the lower half, nothing is very far away. In Spotify’s words, the new Home screen “the new Spotify Home does the hard work for you, making it easier than ever to find something to listen to – whether a long-time favorite or brand-new discovery”.

Providing you have at least 30 days of listening history, the revamped look should be making its way to you right now.

Voice control
But while the current changes focus on touch controls, there could be an exciting developments just around the corner in the form of voice activation. Discovered by app researcher and reverse engineer Jane Manchun Wong, the feature will make use of the ‘Hey Spotify’ keywords.

Very little is know about voice activation so far, as Spotify hasn’t officially announced anything. However, in a screenshot shared by Wong, you can see that when the ‘Hey Spotify’ feature is enabled, the app will listen out for voice commend ‘when the app is open and on your screen’.

It’s an exciting development, and we’ll keep you updated as soon as we learn more about how it will work, and when it will arrive.