Apple’s upcoming 4.7-inch iPhone is likely to be announced imminently and looks set to be called the iPhone SE. A Belkin screen protector is currently live on the Apple Store and listed for the iPhone SE as well as the 8 and 7, matching reports that the new phone would feature a similar design to those models.

Earlier today 9to5Mac reported the iPhone SE name, as well as details including that it’ll come in white, black, and red color options with storage tiers of 64GB, 128GB, and 256GB. The device is expected to come with an A13 processor, though pricing information is still unknown.

The Belkin accessory is called the “InvisiGlass Ultra Screen Protection for iPhone SE/8/7.” It’s on sale now for $39.95, though in-store pickup is unavailable since Apple has closed all its stores outside China. The product is also available in a 5.5-inch size, but that listing only makes reference to the iPhone 7 Plus and 8 Plus. 9to5Mac’s previous reporting has suggested a new 5.5-inch iPhone is also on the way. 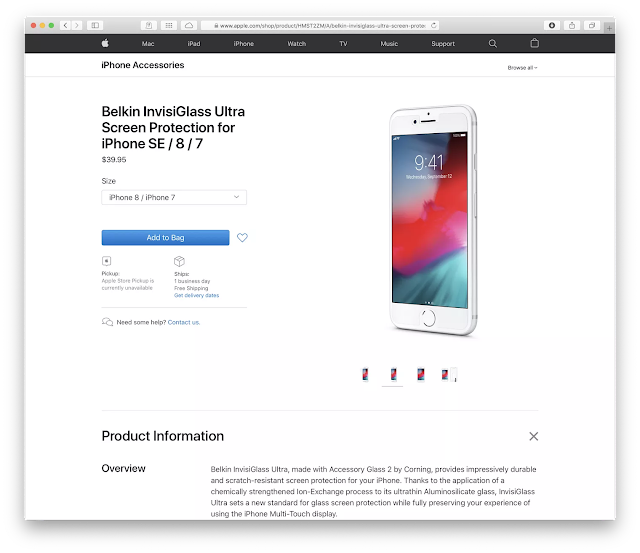 There have been rumors about a new 4.7-inch iPhone for many months now, but while supply-chain analysts are often able to glean hardware details ahead of time, it’s rare that anyone can make accurate predictions on product marketing decisions like the name of a particular iPhone. Apple shares that information with very few people internally, and of course it’s easier to decide on closer to launch than a device’s core hardware.

The original iPhone SE came out in March 2016 for $399 and essentially crammed 2015’s iPhone 6S specs into an iPhone 5 body. Some rumors referred to this upcoming 4.7-inch phone as an “iPhone 9,” since it would directly follow on from the 8, but “SE” would technically be in keeping with the prior use of the name.