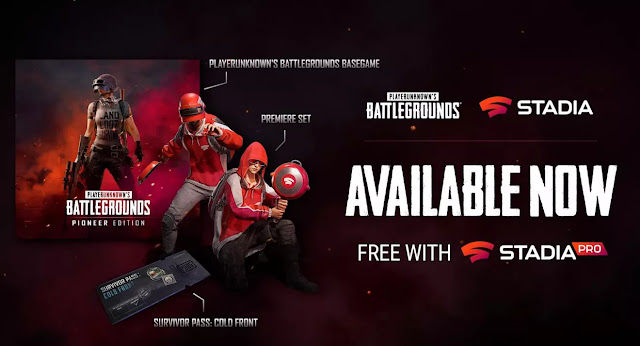 Google is bringing PlayerUnknown’s Battlegrounds (PUBG) to Stadia today, and it’s promising to launch several EA games later this year. PUBG will be free for Stadia Pro members and will include the new Cold Front season pass. Stadia Free members will be able to purchase the base game for £29.99 or bundled with the season pass for £39.99.

PUBG on Stadia will also support cross-play, so you can play against friends on console. Google appears to be launching one of its promised Stadia features with PUBG today: the ability to click a game link and instantly play. You can follow this link if you’re a Stadia Pro member, and it should instantly launch the game. It’s something we’ll likely see used a lot more in YouTube videos to promote Stadia games.

Alongside the PUBG launch, Google is partnering with EA to bring Star Wars Jedi: Fallen Order, Madden NFL, and FIFA to Stadia later this year. There are no exact release dates for all three of the titles, although Google did say that Star Wars Jedi: Fall Order will arrive this fall, while Madden and FIFA will be available this winter.

Google is also planning to launch Crayta exclusively on Stadia this summer, free for Stadia Pro members. Crayta is a collaborative game creation and sharing platform powered by Unreal Editor 4, and players of varying skill levels will be able to build multiplayer games with Crayta. Co-op game Get Packed is also launching on Stadia today, priced at £19.99, with campaign and versus modes for up to four players.

May’s Stadia Pro games include Zombie Army 4: Dead War, SteamWorld Heist, and The Turing Test that are all claimable on May 1st. Thumper will be leaving Stadia Pro at the end of April.