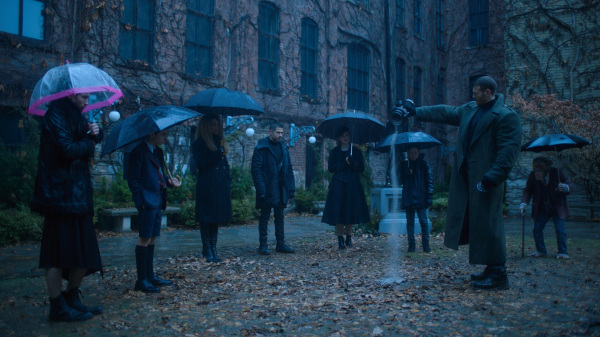 The Umbrella Academy season 2 release date has been set for Netflix this summer, with the cast of the comic-based superhero franchise appearing in a quarantine videoconference teaser to pitch the show’s upcoming return.

The dysfunctional-family superheroes will return with a new set of adventures on July 31, 2020, on Netflix worldwide. The live-action series is based on the “Umbrella Academy” comic books created and written by Gerard Way and illustrated by Gabriel Bá, published by Dark Horse Comics.

In the backstory of The Umbrella Academy, on the same day in October 1989, 43 infants are inexplicably born to unconnected women who showed no signs of pregnancy a day prior. In the Netflix adaptation, six are adopted by billionaire Reginald Hargreeves (aka “The Monocle”), who creates the Umbrella Academy and preps his “children” to save the world: Vanya/The White Violin (Ellen Page), Luther/Spaceboy (Tom Hopper), Diego/The Kraken (David Castañeda), Allison/The Rumor (Emmy Raver-Lampman), Klaus/The Séance (Robert Sheehan) and Number Five/The Boy (Aidan Gallagher).

Watch the teaser for “Umbrella Academy” season 2, featuring the castmates dancing to Tiffany’s 1987 rendition of “I Think We’re Alone Now,” in a nod to a fan-favorite scene in the series’ very first episode: